BY JONATHAN BECKER
via www.theatre-masks.com 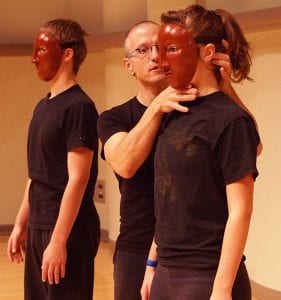 What is Economy of movement? Why would that be important?

I was once having a conversation with a colleague and had just mentioned having finished the section on neutral theatre mask. She asked me how long I had spent with the students on the neutral mask exercises. I replied eight weeks. She was shocked. What were you doing for eight weeks she asked? I had to think for a minute before replying because for me the answer was simply, neutral mask work. It occurred to me that not much has been written about the class work with the masks or what surrounds the mask work that makes it so deeply effecting for the students.   It is not enough to simply hand out the masks and get started. The student needs a foundation for understanding the work and a body that will be available to support the mask. Grotowski refers to the body as a vessel of sensation. It is the sensations, which exist mostly on an intuitive level as a guide to an understanding of the neutral mask lessons.

For an audience to clearly understand the complexity of a theatrical event; for there to be a dynamic exchange between the actor and the audience, the performer must be engaged in specific, simple behavior that focuses attention on the relationships, the objectives and the story being told. Specific behavior allows for clarity. For specificity to exist the actor must behave with an economy of movement and of thought. This concept of economy is fundamental to the acting process and essential in training.

This idea of economy is directly connected to the actor’s ability to efficiently access emotional response, fulfill the needs and wants of a given situation and “be in the moment.” The actor often clutters the work with extraneous movement, unrelated thought and activity that is not connected to the objectives at hand. Actors train to simplify. When an absolute economy appears then the audience see’s and connects to the person. Thought can then be revealed through action and a strong connection between the audience and the actors arrives. 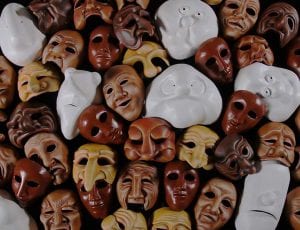 From a purely technical point of view it is possible to identify physical emotional centers and the connection between breath and emotional response. When the body has reached a centered or grounded state in which breath is connected and there is an understanding of release and the following of impulse it is possible for the actor to physically score an action that will lead to an emotional response. At the very least if there is no inner emotional response the audience will understand from the action what has transpired and respond just as strongly as when the actor is emotionally engaged. Lecoq used to communicate this in his feed back to the students at the school in Paris when he’s stop an improvisation or a prepared work in which the actors where becoming emotionally indulgent and say, “That felt good, yes?…but what about us, what about the audience?” The ideal is of course an actor who is connected to the action in such a way as to always have an emotional response to what is going on in the moment.

Another way of explaining this concept of economy as relates to thought action and movement is to actually score what is happening so that the actor can see the order in which thought, text and action are happening so as to draw attention how best to play these elements.

The following is a grid that illustrates graphically the relationship between thought, breath, action and text.

Here one can clearly see the relationship between thought and action and how breath supports the action and reveals thought. In the first row we see that the very first thing that happens is an inhale and the then the thought of, I must escape. Both of these happen offstage before the actor enters. Then the actor enters quickly and directly on the exhale. Here Laban terminology has been use to help further define how this action is executed. The stop and the thought of what is that sound are separated so that that the thought is revealed in a moment of stillness. This also highlights the fact the thought, what is that sound leads to the line of text, “Who goes there?” Then the actor slowly turns, leading with the pelvis toward the entry. The choice of leading with the pelvis in this case has been made by the actor because it leaves the body very open and vulnerable to the impending attacker. The open vulnerable body communicates both vulnerability to the audience as well as resulting in the actor feeling vulnerable. The turn is followed by the thought of discovery on an exhale, there he is. This exercise can be done with an entire scene to highlight exactly what s happening and more importantly to eliminate what is not. The score provides clear elements that can be honestly played. The suggestion here is not to propose this as a method for acting but rather as a tool for understanding. When any actor is truly engaged in the moment this is what is happening intuitively from an organic point of view whether the actor has trained in this way or not. It is a way of highlighting the essentials of what one is after in a training environment regardless of the “method” being used.

Students often ask, “what does it mean to be in the moment,” how can I repeat something over and over again when I can’t remember what I did in the first place, how do I know if a moment is working. It could be said that an actor cannot be completely in the moment if he is in any way doing more than what needs to be done. The Zen phrase would be to say, do only what you are doing and nothing else. If the actor is in the moment only doing what needs to be done then he or she can proceed with awareness and a sense of listening that allows for an effective conversation between the actors and the audience. If there truly exists an economy, the actor is only doing what is necessary, then the memory of the event for the actor becomes clearer and the possibility of repeating successfully the performance is greatly increased if not guaranteed.   In the training the student must be made aware of all that is not necessary. We apply this knowledge to both thought and movement. Once the unnecessary has been eliminated, we can break down and identify connections and how to make use of these connections in preparation and performance. 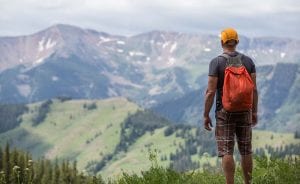 The journey toward an understanding of economy can manifest in many ways. In all cases in order to behave with economy the student must:

Be aware of where habitual tensions are held in the body

Through a study of movement in its most economical form the physiological aspect of the work is removed and the physical actions can then be used as a reference point for relationship and emotional response. 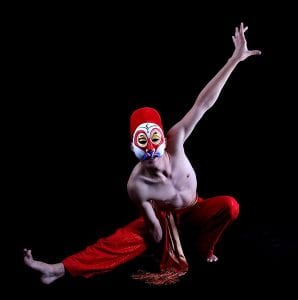 The Body as text

The Neutral Mask and Economy of Movement

The neutral mask exists in a constant state of discovery. Because the mask has no past it is connected to the world around it reflecting what it sees through a curious pursuit and discovery that drives it forward into the world. It’s present state of existence lends to an understanding of absolute economy. A well made neutral mask reveals unnecessary action, unnecessary thought, indicative behavior and habitual tensions held by the actor. 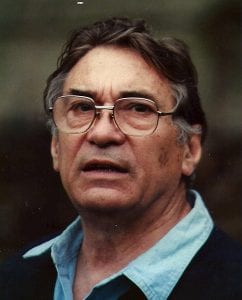 As a tool the neutral mask is demanding of the actor that he or she become a blank slate which could be described as a body alert in a state of calm readiness in face of the world. The body of the actor essentially becomes the universal body of man or of woman rather than the body of that particular actor. This universal state of being although dictated by the mask is something that grows from within. With the donning of the neutral mask, the actor must leave behind his or her personality, everything that he or she knows, all the physical qualities that make the individual distinctive, and stand in a state of simple readiness for what is to come next. This is the basic starting point where one is freed to rediscover a state of non-knowing. From this state of non-knowing readiness the actor is brought to absolute economy of movement and of thought. The only part of the world that exists is that which is right in front or directly surrounding ones being. What one can immediately see or sense then leads to the next thing that one can immediately see or sense. Only that which is being seen or sensed is present and nothing else.

The study of the economy of movement in physical action (how to achieve the maximum result with the least effort), and the state of dramatic neutrality (a state of availability without past or passion) enables us to better understand the manifestations of life through a state of perpetual discovery without preconceptions and without the interjection of personal conflicts. (Lecoq, Mime118)

Want a workshop in masks in actor training?Check out the summer 2018 Mask Training Workshop in the spaces of Theater-Masks.com at The North American Laboratory for the Performing Arts in Muncie, Indiana.

Jonathan Becker is a mask maker, teaching artist and performer. He began sculpting masks in 1986 while a student in Paris, France and founded Theater-Masks.com in 1990 upon his return to the United States. Jonathan has created over 10,000 masks for theatre companies, producing organizations, individual artists and training programs in over 40 countries.