BY DARRYN KING
via www.forbes.com 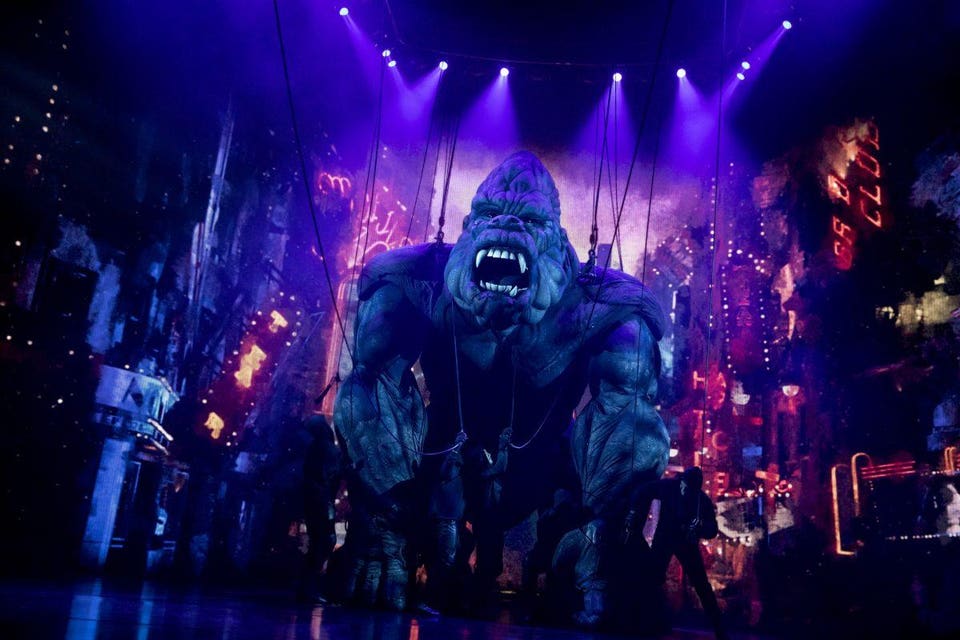 No one applauds the lighting designer.

Theater audiences are regularly dazzled by the costumes and sets, stirred by a writer’s words, an actor’s sweat and tears, enthralled by a director’s coup de théâtre. They may be moved by a piece of music or moment of sound design.

But it’s the nature of lighting design that few audience members consciously notice it, let alone admire it, or leave the theater with a lasting impression of it.

And yet, its role is crucial. “Lighting is in many ways the last creative act of the totally collaborative process that we call theatre,” says Peter Mumford, the lighting designer behind two shows this season, “King Kong” and “The Ferryman.”

Similar to the editing process in film, lighting design is essential to direct the eyes, frame the picture and aid in the transitions from scene to scene—but there’s even more to it than that. “Lighting has a definite narrative role alongside its visual responsibility,” says Mumford.

From twilight in London to the golden haze of American farm country, rural Russia to sunrise in contemporary Las Vegas and one long day in Northern Ireland, some of Broadway and off-Broadway’s leading lighting designers shine a light on their inspiration and process.

“We lighting designers have a joke,” says Brian MacDevitt, “that it’s not the best lighting, but the most lighting that wins a Tony.” (Lest MacDevitt be accused of sour grapes, it should be pointed out that he has won five Tony Awards for his lighting design.) “I think voters respond to big lighting events, not subtlety.”

He adds: “There are plenty of plays that call for theatricality, where there is a need for expression in lighting that could transport the audience in an unreal or dreamlike way. ‘The Pillowman’ comes to mind. Those types of shows are a joy for the designers to show their ‘chops,’ and might result in attention from the Tony committee.” 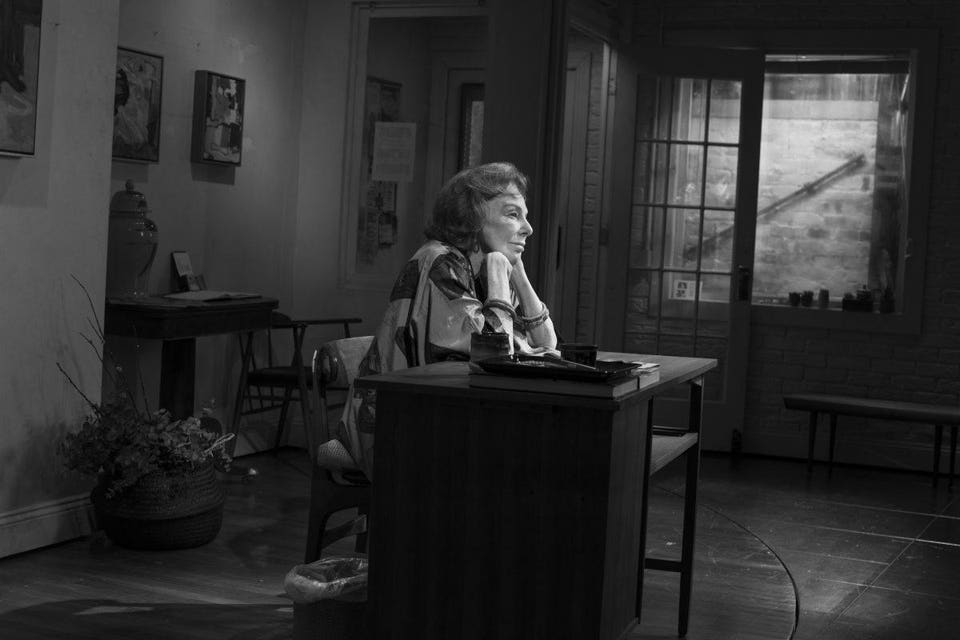 Elaine May in ‘The Waverly Gallery’BRIGITTE LACOMBE

But lighting a play like Kenneth Lonergan’s “The Waverly Gallery,” which centers on the slow decline of a feisty octogenarian, is like scoring music for a realistic film, says MacDevitt. “If you notice it, it’s probably too much … I try to make it look like life. It’s subtle.”

Along with director Lila Neugebauer, MacDevitt found inspiration in John Koch’s paintings of life and light in Upper West Side apartments. “His paintings always contain daylight sources, either direct or indirect, and incandescent lamps you would find in an apartment. It’s the contrast of those two sources that we are trying to emulate in the show.”

MacDevitt describes the essential, practical responsibility of lighting as “delivering” the characters, “so we don’t miss any action.”

But he also permits himself some moments of poetic, painterly beauty. In the final scenes of “The Waverly Gallery,” MacDevitt floods the apartment, through the window, with indirect light—a composition that would have pleased John Koch.

“I feel like we nailed it,” says MacDevitt, of the scene. “It makes me very happy.”

“The Lifespan of a Fact,” Jen Schriever

There are a number of initial questions that Jen Schriever, lighting designer for “The Lifespan of a Fact,” will ask about a scene before lighting it.

What is the light source? Is it a lamp? Is it the moon? Is it the sun?

But, as she explains, lighting design does far more than literally illuminate a space—it defines it emotionally and psychologically. “Is it a dingy, lamp-lit office? Is there a warmth and welcoming to the room? Is there a tense buzzing of a too-bright fluorescent putting pressure on the characters? Is it a romantic moonlit night, or is the moon a betrayer, stretching shadows into unknown shapes, ever changing from the night clouds?”

“The Lifespan of a Fact,” a play about the tussle between a writer and a fact-checker, features two primary spaces. The first of these is the well-lit office of a magazine editor. “The lighting is sharp and bright and angular,” says Schriever. “No shadows in this uptown editorial world.” 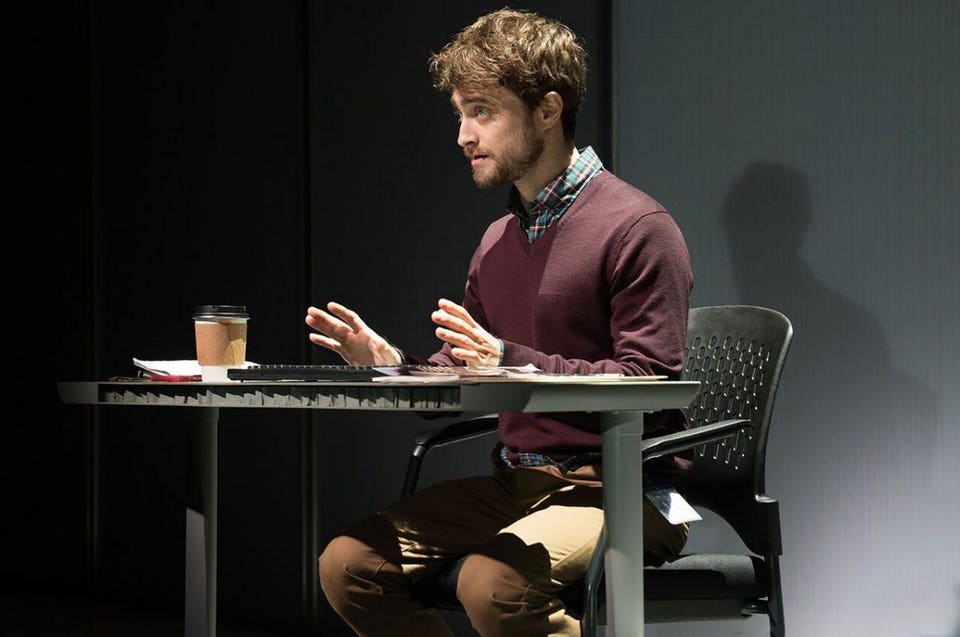 Daniel Radcliffe in ‘The Lifespan of a Fact’PETER CUNNINGHAM

The second half of the play takes place on the outskirts of Las Vegas, in the 1970s ranch home of John D’Agata, the writer whose relationship with the truth is under scrutiny. “The light is the opposite of the New York City magazine office,” says Schriever. “Broken bright Vegas sun streams through the tiny windows. Like his essay, the light in his home doesn’t reveal anything straightforwardly. Slivers of moon light create pockets of light and clarity, and the lamplight doesn’t fully illuminate the room.”

Then, gradually, we witness a long slow sunrise, filling John’s house with bright desert sunlight. The light stretches through the small living room “almost explicably,” says Schriever, “as the trio each find their own personal resolution.”

Several months before rehearsals began for “My Fair Lady,” its lighting designer, Donald Holder, was living and working in London. Holder took the opportunity to seek out locales from the musical, Covent Garden and Tottenham Court Road.

“I made a point to take some really early morning pre-sunrise walks through the area, so I could get a sense of the color of the light, the sky and the architecture at dawn,” says Holder. “I was fascinated by the interplay of artificial light spilling out of windows onto the pavement, and as daylight broke I observed a multitude of spectacular shadows and reflections created by low-angle early-morning sunlight piercing through the arches and walkways.” 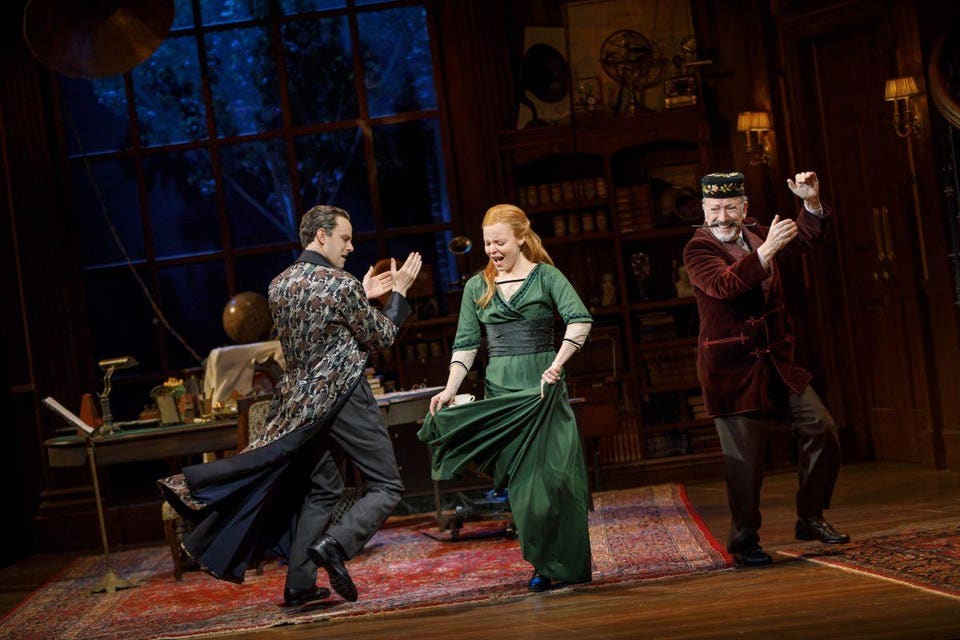 Apart from field research, Holder sought out the work of several late 19th-century British painters. “I thought that perhaps a few might have rendered scenes from London or its environs at the time ‘Pygmalion’ was written,” he says, “thus giving me some visual insights into this world.” The work of painter J.M.W. Turner—who was born in Covent Garden and obsessed with evocative representations of natural light—was especially useful.

“His studies, particularly one of his most famous works, ‘Fisherman At Sea’ really spoke to me about the color and dramatic quality of the moonlight we might encounter late at night in Covent Garden.”

For interior scenes, Holder employed older tungsten halogen theatrical fixtures, seeking to recreate the tone and feel of electric lighting in early twentieth-century London. “There is a certain warmth, golden and almost candle-light quality to early electric light that I felt should have a dominant presence, in the Higgins interiors in particular,” he says.

Lighting designer Scott Zielinski’s most conspicuous lighting moment in director Daniel Fish’s radical reinvigoration of “Oklahoma!” is the absence of it. More than once during the show, characters and audience members alike are plunged into claustrophobic darkness.

At other times, the theatre space turns a glowing, night-vision green. A prying glimpse of the cowboy and the farm girl under the cover of darkness? An X-ray into their souls? Certainly a striking visual counterpoint to Rodgers and Hammerstein’s bright golden morning. 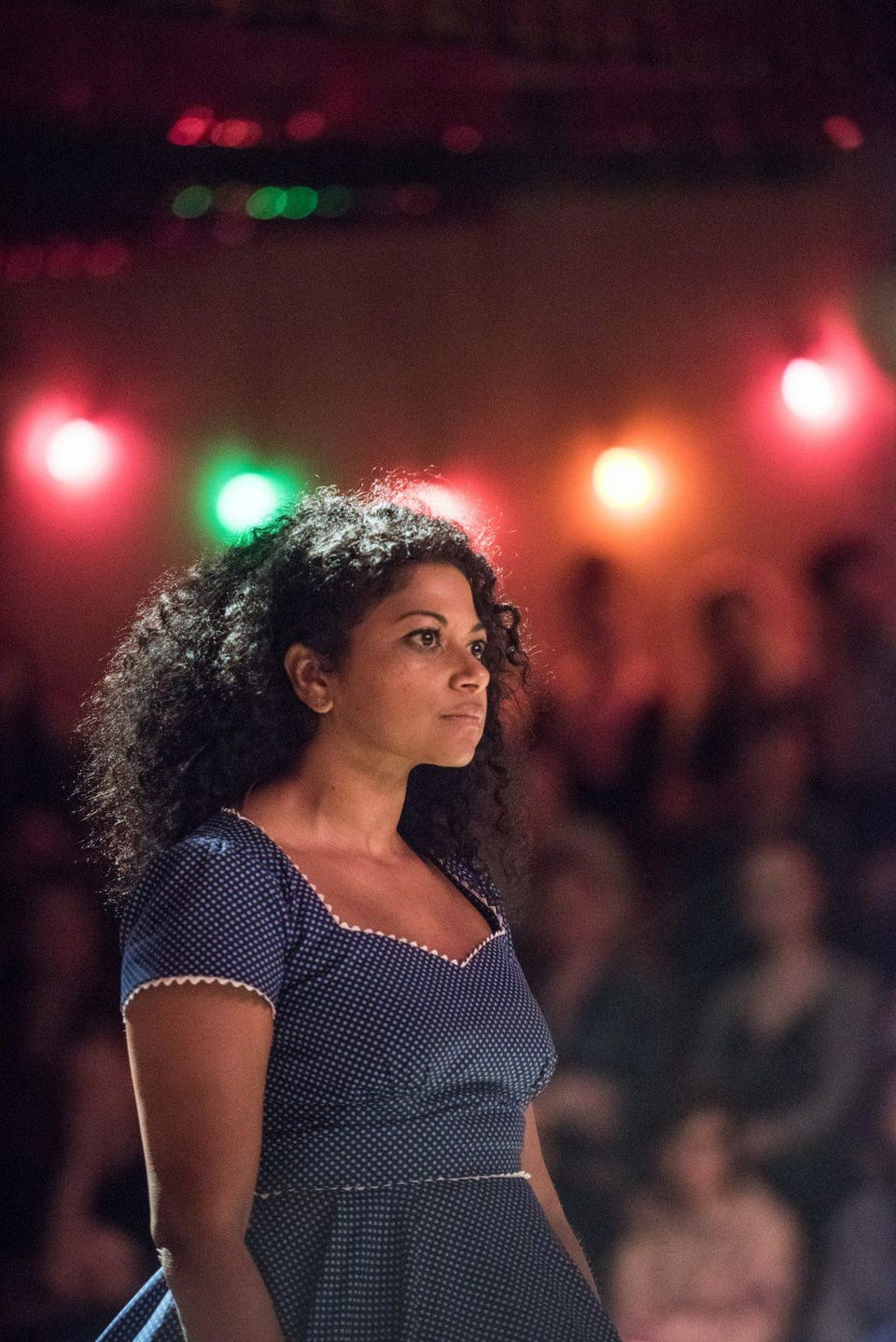 For most of “Oklahoma!”, though, traditional incandescent lighting casts a warm white light over, well, everything and everyone. It’s true to the communal atmosphere of the show, in which actors, musicians, and two banks of audience members occupy the same “room”—a large, rectangular plywood box with picnic tables and multi-colored mylar banners hanging from the ceiling. (It also renders the costumes more vibrantly, a gentle nod to Technicolor world of the 1955 film.)

“The lighting gestures are direct, to the point,” says Zielinski. “It echoes the style of the production, and enhances the ‘all-of-us-in-the-same-room’ idea.”

“Light is a visual element that can ‘whisper’ into the eyes of the audience,” says Les Dickert, the regular lighting designer with Bedlam Theatre.

“It can shout as well,” Dickert adds, “but it’s the whispering that I fell in love with.”

In “Uncle Romeo Vanya Juliet,” Bedlam’s mashup of the Chekhov and Shakespeare plays, the atmosphere can range from defeatist, to dreamy, to unabashedly hopeful. 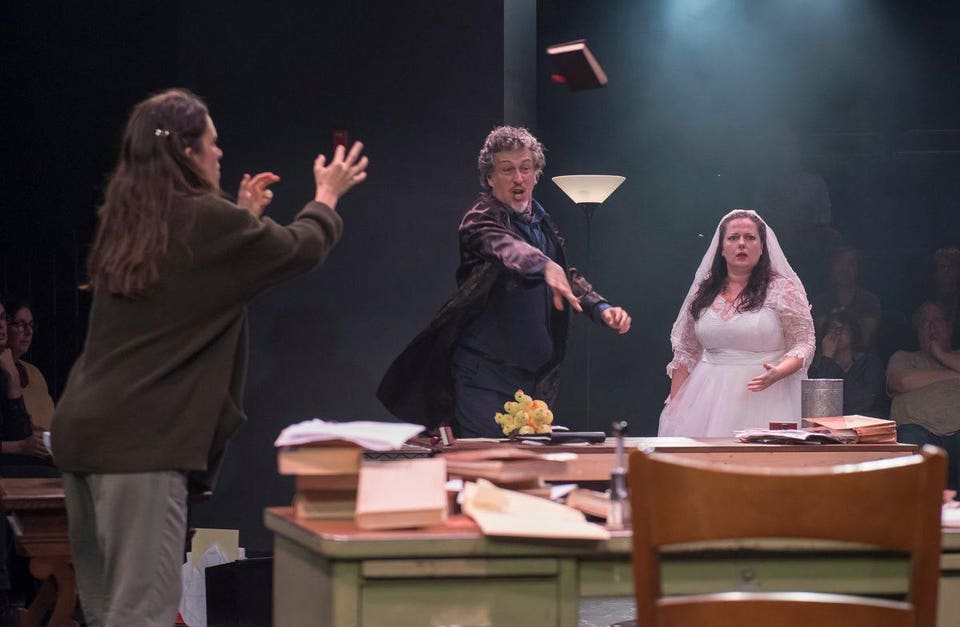 ‘Uncle Romeo Vanya Juliet.’ ‘Light can whisper into the eyes of the audience’ASHLEY GARRETT

“Working through the script with director Eric Tucker and sorting out which moments might feel which ways was a delightfully interesting undertaking, given the cross-cut and interwoven nature of the composite play.”

As Dickert explains, sometimes light can powerfully counterpoint action, rather than parallel it. During one of the “Uncle Vanya” segments of the play, a patriotic song rings out, but the characters are miserable as they sing it.

“Rather than parallel that moment with despondent light, we created a lighting visual that’s quite jubilant, contrasting the malaise, making the moment even more striking in the juxtaposition,” says Dickert. “I doubt that the audience is aware of how the light helps that moment, which is an example of how light can be quite powerful in its subtlety.”

As part of his preparations, Peter Mumford will study the script, have long conversations with the director and designers, listen to the appropriate music. But his real work as a lighting designer only begins once he’s in the theater.

“[That’s when] I can respond visually to … all the elements that merge suddenly in pre-production.” 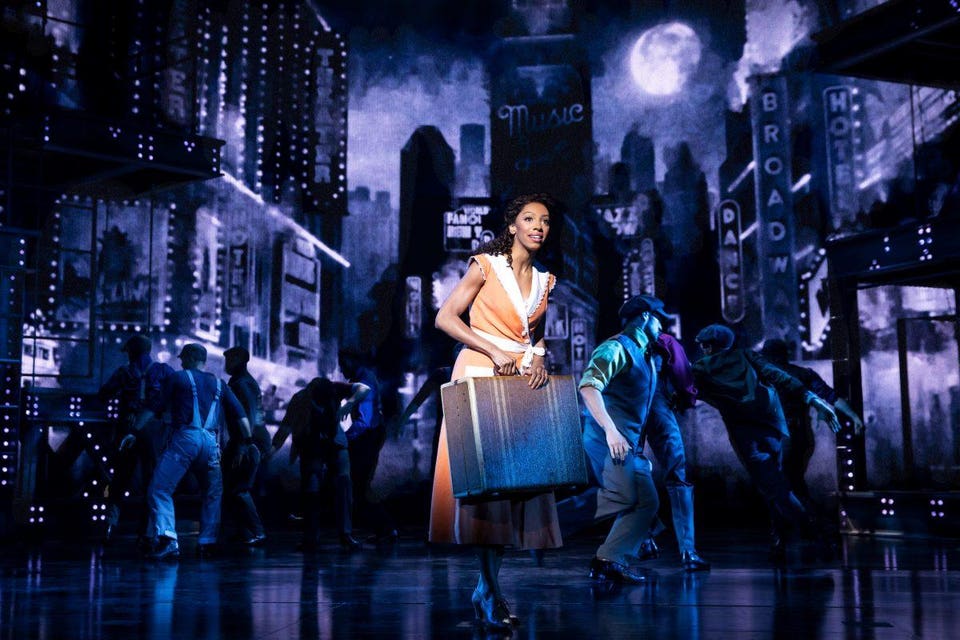 Mumford’s lighting in the musical “King Kong,” while incorporating naturalistic elements, is generally upfront, more purely expressionistic, to suit the heightened reality of the musical and the monumentality of Kong himself: the great ape’s rampage through the Broadway Theater District has the spectacular lighting befitting a Broadway show.

“The very nature of a musical with a great deal of dance content allows lighting design to take on a more scenic role, often in a sculptural sense,” he says. “Many if not most of the lighting changes are motivated by either music or choreography.”

Meanwhile, Mumford describes his lighting for “The Ferryman” as ‘controlled naturalism.’ The light through a window—the only source of natural light in the play’s full-ceilinged set—signifies the time of day, but also allows for “subtle shifts that focus and shape the performance.” 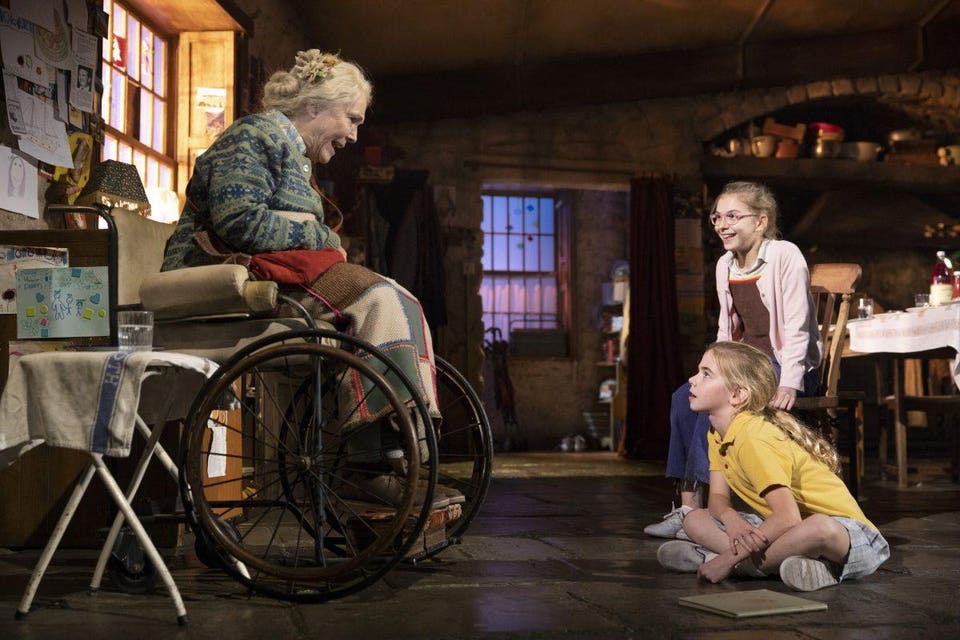 A slow-burning scene at the top of the second act, for example is effectively augmented by the reddening, then setting, of the sun. The scene is abruptly interrupted, and the mood naturalistically altered, when a character switches on an interior light.

It’s just one of more than one hundred “hopefully imperceptible” lighting gestures in the production. “For the most part I am trying to merge the lighting changes to be almost invisible,” says Mumford, “but still significant.”